When we hear the term ‘business laptops’ our first instinct is to inch away as the name mostly endears high-end users. Even for users who’s lifestyle demands sleek and powerful machines, are often forced into settling for less. Given ofcourse the price sensitivity. Lenovo has thought outside of this social convention with their two latest releases. The Lenovo ThinkPad L390 and Lenovo ThinkPad L390 Yoga.

Now we are aware that these laptops might not fit the exact definition of ‘versatile professional laptops’ but they do come pretty close and are a step in the right direction. Let’s see what Lenovo has to offer.

While both laptops sport a 13.3 inch full HD touchscreen display, the Yoga L390 is a flexible version of its sibling. Yoga can be twisted and turned into almost every angle whereas, the L390 supports a 180-degree hinge and can be laid out flat on a surface. However, it is slightly lighter than its more flexible counterpart. 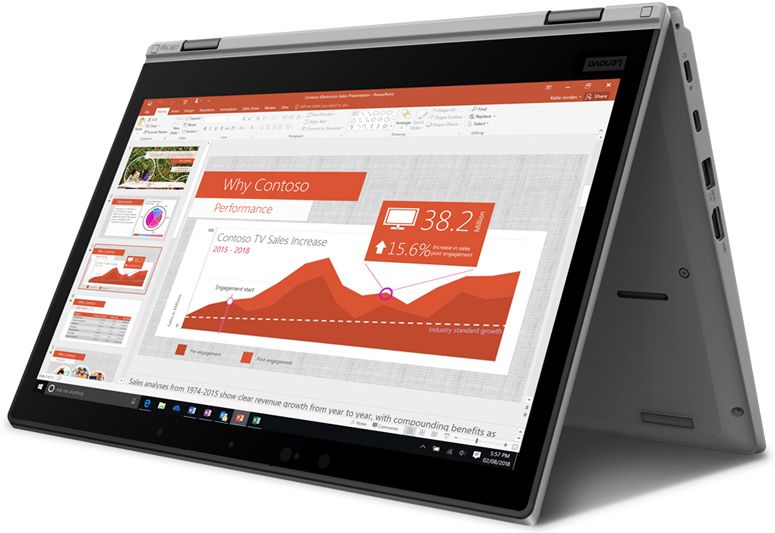 Its total weight rounds up to 3.2 lbs, a fraction less than the Lenovo Yoga L390 that weighs up to 3.44 lbs and is just 8.8″ in width. The ThinkPad L390 Yoga does come with an additional plus that is the Active Stylus pen support that can be placed in its built-in garage slot. Sweetening the deal up a bit more, it sports a full 360-degree hinge to use it as a tablet.

You may like to check out: The Best Laptops for Artists with Pen Support

These svelte notebooks are powered up by the newest 8th Gen Intel Whiskey Lake processors and they can support up to 32GB of DDR4 memory and up to 512GB of PCIe solid-state storage. The port selection on these ultrabooks include two USB Type-C ports, a couple of USB 3.1 ports, HDMI 1.4 and mini Ethernet jacks, along with a microSD card reader.

Of course, these high-end notebooks are not left without fingerprint sensors. They also come with Lenovo’s encrypting data on its dTPM 2.0 chip.

Here we will again see the Yoga L390 taking the spotlight. It sports a webcam (without ThinkShutter) and an IR camera with Windows Hello compatibility for quick logins.

For the battery, Lenovo has featured both its latest ultrabooks with 45 WHr batteries. Lenovo has promised for the non-convertible L390 to deliver up to 14 hours of battery life and 12 hours for Yoga.

Both of the sleek and flexy books come in silver and black colors. The laptops are expected to break the shelves this month with prices starting from $659 for a basic Lenovo ThinkPad L390 and $889 for the ThinkPad L390 Yoga.

About the author Khushaar Tanveer

Encouraged and zealous writer. I have been working with technical news, reviews, and blogs longer than I can remember. Writing for me has always been a passion more than a profession. I believe this keeps me updated and aware of all new reforms in technology.

Welcome to Laptop Under Budget – A website focused to help people in buying the best laptop within their budget. We compile a list of top laptops in different price ranges and create in-depth laptop buying guides for various requirements of people.

So, what type of laptop you are looking for? What is your budget? Check out our different laptop buying guides to buy the best laptop within your budget.

Check out our About us page to know how we pick laptops for our laptop buying guides.

If you want specialized expert suggestions to buy your new laptop, then ask our experts to find and suggest the perfect laptop match for you.

We will send you Emails with best laptop deals and special discount offers. Every month!

You have Successfully Subscribed!

Still Can't Figure Out Which Laptop is Best For You?

No problem! Tell us your requirements and our team of laptop professionals will find the perfect laptop match for you.